On the 12th of July; right after our fellowship project “BBQ night” happened at Gavindu’s place, our sleepy heads showed up at SLIIT premises dressed in formal attire. We all gathered at 8.30 near ‘dupath’ area (except for me :3 I was late as usual). By the time I went, our team had arranged the chairs and our beloved president had left to call MD/CEO Prof. Lalith Gamage and Chairman Prof. Lakshman Ratnayake of SLIIT. So, we quickly made the formation; girls standing in the front row and boys in the back row. Gavindu the Treasure, Sandali the Secretary and Sethil our Vice President were seated in front. When Vinura ayya accompanied with Mr. Lalith Gamage and Mr. Lakshman Ratnayake arrived, everything else was set for the pic. It only took half a minute to take the group pic. See! We all look good! 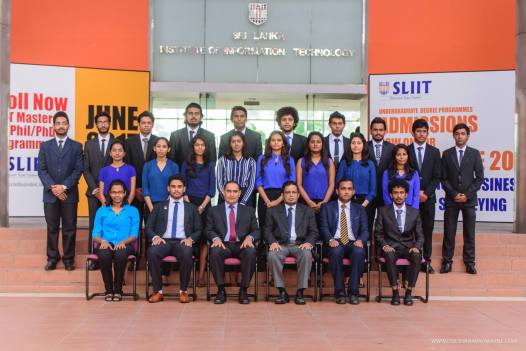 Then the real struggle began. The “funky” pose! Dulshan ayya, our cameraman asked us to pose. We were trying out every possible pose we could think of for more than 15 minutes but none of those came out right. Realizing that we would take forever to decide, Dulshan ayya showed us few cool poses. Aaand then… we posed. 1, 2, 3 jump!! Dab! Pretend to be thinking!!

A wise man once told that “people” are one of the easiest subjects to a photograph. Well that wasn’t true in our case. We all were so photogenic to the point that we could laugh at our own pose😜. We tried again, and again and again… After putting so much effort, we were able to capture that perfect shot. Believe it or not it came out really nice.

See it for yourself😋!!