The 5th Installation Ceremony of the Rotaract Club of Sri Lanka Institute of Information Technology, which is one of the most significant events in the SLIIT Rotaract calendar was successfully held on the 22nd of July 2017 from 4 p.m. onwards at Sri Lanka Institute of Tourism and Hotel Management. This marked yet another remarkable and hopeful start for the Rotaract Club of SLIIT with the installation of Rtr. Vinura Ganegoda and his board of directors for the year 2017-18.

Starting up with the proceedings, the Chief Guest and the dignitaries were warmly welcomed and requested to light up the traditional oil lamp. The Chief Guest of the event was Mr. Panduka Mallawarachchi, Senior Manager HR/Administration and Head Administration of Metropolitan Campus of Sri Lanka Institute of Information Technology and Guest of honor for the evening was Rtn. Tania Weerasooriya, Youth Service Director of Rotary Club of Battaramulla, which is the sponsoring club of the Rotaract Club of SLIIT.

The ceremony was called to order by the outgoing President Rtr. Kavinda Bandulasena and was followed by the Rotaract Invocation, Flag Salutation, Four-way test and the Rotaract song. The gathering was then formally welcomed by the project co-chairperson Rtr. Sethil Muhandiram. Which was followed up by the Secretary’s report for year 2016-17 presented by Rtr. Arundika Weerasekara, recalling the remarkable memories of the last year. A creative video clip which included cherished moments and memorable photographs from each project conducted in the year 2016-17 was then played.

Next the Outgoing President, a key player responsible for making the 4th year a success Rtr. Kavinda Bandulasena addressed the gathering and he was grateful to the members for being with him, and helping him to achieve his goals during the year. He also did not forget to appreciate the members who worked with commitment during the year. He specially thanked Rtr. Imalsha Udawatta who is the Charter President of the Club, for bringing the club to this position. He individually thanked everyone including his Board of Directors, to whom which personalized certificates were handed out.

Next the outgoing president Rtr. Kavinda Bandulasena officially handed over the duties and responsibilities of the Rotaract Club of SLIIT by collaring Rtr. Vinura Ganegoda as its 5th president. 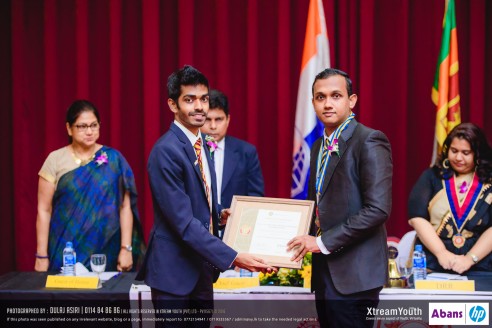 Rtr. Sethil Muhandiram, long time best friend and batch mate to Rtr. Vinura Ganegoda introduced the incoming president. This was followed by a small presentation that showed the audience the Incoming Presidents’ many sides. Then he was given the chance to address the gathering. In his speech he thanked all the individuals who had supported him to come to a position like this. He further mentioned that this year will be an unforgettable year for RACSLIIT with the powerful theme of ‘Escape the Ordinary’.

Then came the introduction of the new Board of Directors for the year 2017-2018.

Once the board was introduced, the podium was then turned over to the dignitaries. DRR Rtr. Anuradha Senanayaka addressed the gathering and congratulated the new President and the Board of Directors for the current year. In her speech she specially mentioned about her District Digital Communication Directors; Rtr. IPP. Kavinda Bandulasena and Rtr. Eranga Premathilaka, who are proud products of RACSLIIT. She also stated about the upcoming events such as the World Friendship day celebration, etc.

Continuing with the proceedings, Theewraa Band, one of the talented music sensation of D.S. Senanayake College entertained the audience with an amazing performance.

The Guest of Honor for the evening Rtn. Tania Weerasooriya, Youth Service Director of Rotary Club of Battaramulla, addressed the gathering while highlighting the fact that the Rotaract club of SLIIT has been doing really well so far and requested an extraordinary year from Rtr. Vinura and his team.

The Chief Guest for the evening, Mr. Panduka Mallawarachchi, Senior Manager HR/Administration and Head Administration of Metropolitan Campus of Sri Lanka Institute of Information Technology, was introduced and was invited to address the gathering as the next event in the proceedings. He began his speech by congratulating the members of the club and also thanked the club for being active in the Institute. Furthermore he highlighted the importance of such organizations within the institute to develop and improve the skills of students. He mentioned about a few projects that had been carried out by the club, like “Team Alpha”.

Tokens of appreciation for the dignitaries were presented by the club representatives and once it was done, the floor was opened for felicitation. The members of the Rotaract and Interact clubs in attending proceeded to congratulate Outgoing President Rtr. Kavinda Bandulasena and his Board of Directors on their exceptional year and to wish Incoming President Rtr. Vinura Ganegoda and his new Board of Directors for an even better year ahead.

Incoming Secretary Rtr.Sandali Thiranagama ended all formalities by delivering the vote of thanks. The audience and dignitaries then rose for the National Anthem. Newly collared President for the year 2017-18 Rtr. Vinura Ganegoda terminated the 5th instillation ceremony of the Rotaract Club of SLIIT for fellowship.

This marked the end of the Rotaract Chairmanship for Rtr. Kavinda Bandulasena, who has done an outstanding job shaping the club for the past year and yet another beginning of a new Rotaract year for the RACSLIIT.

The 5th Installation ceremony of Rotaract club of Sri Lanka Institute of Information Technology was successfully concluded on a high note.