The 2nd Installation Ceremony of the Rotaract Club of AOD was held on the 20th of July at BMICH Orchid Hall. On behalf of our club Rtr. Umanga De Silva, Rtr. Chamini Ellawala, Rtr. Bhanuka Yapa and Rtr. Navindu Chamara attended the event.

The Installation ceremony commenced with the arrival of the Chief Guest and the other dignitaries and the lightening of the traditional oil lamp. The Chief Guest of the event was Mrs. Linda Speldewinde and the Guest of Honor for the evening was Rtn. PHF. PP. Lakshman Gunawardena.

The ceremony was called to order by the outgoing President Rtr. Sneha Naresh Moorjani and was followed by the Rotaract Invocation, Flag Salutation, Four-way test and the Rotaract song. The gathering was then formally welcomed by Rtr. Raveesha De Silva. Which was followed up by the Secretary’s report for year 2016-17 presented by the Secretary for the year 2016-17 Rtr. Sajani Mandora Pathirane, recalling the remarkable memories of the last year. A creative video clip which included memorable photographs from each project conducted in the year 2016-17 was then played.

Then the outgoing president Rtr. Sneha Naresh Moorjani addressed the gathering and shared her thoughts. She thanked everyone who supported her to complete the year successfully including her Board of Directors, to whom which certificates were handed out. 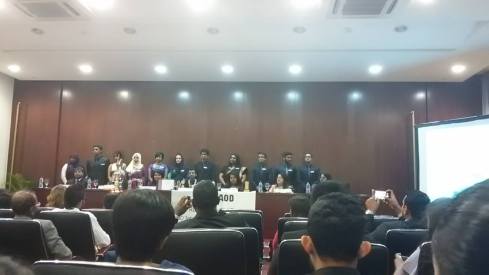 DRR Rtr. PP. Anuradha Senanayake was then invited to address the gathering. She congratulated the new President and the Board of Directors and recognized the efforts of Rtr. IPP Sneha Naresh Moorjani. This was followed by the address of District Rotaract Committee Chairperson Rtn. PP. Bobby Shrinivas.

Then the Guest of Honor, Rtn. PHF. PP. Lakshman Gunawardena graced the audience and inspired the young Rotaractors on “never giving up” followed by the address of the Chief Guest Mrs. Linda Speldewinde.

After the distribution of tokens of appreciation to the dignitaries, the floor was open for felicitations. The vote of thanks was delivered by the Assistant Secretary Rtr. Bevan Jonathan David, followed by the National Anthem. Then the 2nd Installation ceremony of Rotaract Club of AOD was successfully concluded.