On the 18th morning at around 10.30; we, the SLIIT Rotaractors went to pick them up from Rajagiriya; from the place where they stayed. By the time we went there, Nepali people had already dressed and were ready to leave. But the Indians had just arrived after a tiring flight. So we had to wait there a little longer till they freshen up. In the meantime, we got the chance to have a friendly chit chat with each other. Within a minute of time all our craziness was overflowing. We talked about our cultures, shared our traditions and most importantly our Instagram IDs creating a way to get connected with each other. It was a happy moment filled with fellowship and thanked to Aish and her mango juice which was spilled all over her luggage, we got additional time to continue our conversation.

After everyone was ready we all left there and got into a bus. They were so excited about going by bus even if it was one of the hottest days here in Sri Lanka. After that tiring bus ride we had our lunch and came to our very own campus, SLIIT premises. There we had a couple of ice breakers to break the ice. Starting from that, we played a couple of games which all of us enjoyed; with a small visit to the “Bobby’s world”. And then all of us got into two groups and did a game named “Pictionary” where one person from each team had to come up and draw the word which was given to them and both the teams were supposed to guess what that was, before the other. In between those games, we took pictures, danced and did everything we could which will define us, the craziness.

Since every good thing must come to an end, the clubs exchanged the letterheads of appreciations and put an official end-note for that wonderful evening.

At around 4:30 we were supposed to return back to their place. On the way back we went to have some snacks and for one last time we took pictures together to collect those memories in a photograph.

We all got to know a lot about each other within that few hours we spent together. Even it was just for a couple of hours, that little time spent was unforgettable. It was more of having fun that day than just letting their day pass, remembering us how much we all have in common, understanding each other and redefining friendship; which is all what Rotaract is about! 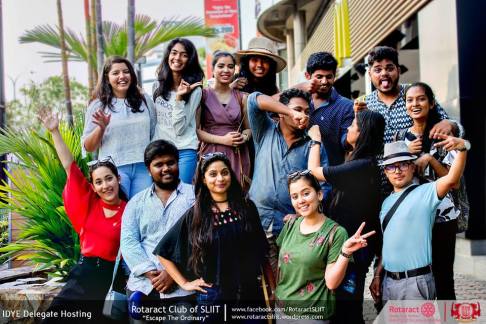