The most awaited Annual General Meeting of the Rotaract Club of SLIIT for the year 2018-19 was successfully held on the 4th of July 2018 from 12.30 p.m. onwards at SLIIT premises. Remembering the accomplishments and achievements of RAC SLIIT during the past year; it is the time to set new goals for the club and to take the club to greater heights at the new beginning of our Rotaract year.

The meeting was called to order by the outgoing President Rtr. Vinura Ganegoda and was followed by the National Anthem, Rotaract Invocation, Flag Salutation, Four-way test and the Rotaract song. The meeting commenced with the speech of our beloved outgoing President Rtr. Vinura Ganegoda. In his speech he thanked everyone including his Board of Directors and club members for being with him and helping him to achieve the goals, to “Escape the Ordinary” during the year. He mentioned club’s achievements in the past year which included the most outstanding Community Service Project under literacy (Gold Award) – Project “Light Up Their World”, the most outstanding Community Service Project under community development (Gold Award) – “Sihina Tharanaya”, the most outstanding Female Empowering Project (Silver Award) – “Halo Career and Professional Development Training” and highlighted that 38 projects in total were completed throughout the year 2017-18. He thanked everyone who contributed towards making those projects a success and for making the past term one of the most successful years. Then he introduced the incoming president Rtr. Sethil Muhandiram.

Next the outgoing president Rtr. Vinura Ganegoda collared Rtr. Sethil Muhandiram and officially handed over the duties and responsibilities of the Rotaract Club of SLIIT. Rtr. Sethil Muhandiram introduced himself and thanked the outgoing president and all the individuals who had supported him throughout his Rotaract journey. Then, he introduced the newly appointed board for the year 2018-19 to the fellow Rotaract members. Furthermore, he highlighted the fact that the members are the backbone of the club and requested all the members to support him and to get the best out of Rotaract through engaging in Rotaract.

Then the secretary for the year 2018-19 Rtr. Parami Paranavitana addressed the gathering. She expressed her heartiest gratitude to the outgoing president Rtr. Vinura Ganegoda and his board to the immense service done for the Rotaract Club of SLIIT during the year 2017-18. Then the board of directors briefed about the year plan on their respective avenues. 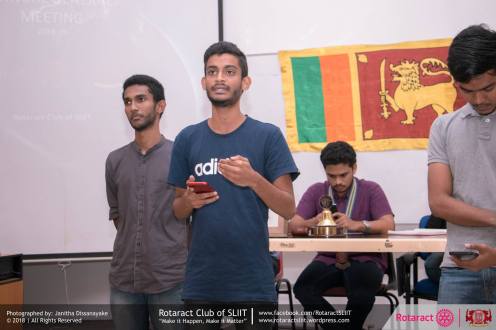 Let us enter a new generation with Rotary fellowship filled with confidence towards inspiring the future.  Keeping our sole intentions on our theme for the year “Make it Happen, Make it Matter”, let us have the firm determination to do a change that matters the entire community. Together as a family, let us all stand tall in making this year of SLIIT Rotaract a year of success.