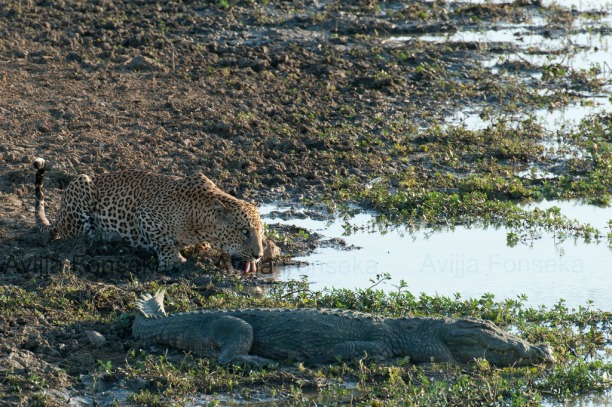 There are 23 species of crocodiles in the world today. The history of the crocodilians dates back to the Triassic period, some 230 million years ago. Alligators and their kin are modern dinosaurs, having existed virtually unchanged for the past 65 million years.

The crocodilians can be broken into four main groups, the alligators, caimans, crocodiles and gharials. Alligators are found only in the South-Eastern United States and in China. Alligators have a short, blunt and rounded snout.

The Chinese alligator is quite small, being about 130 centimeters in length. Caimans are found primarily in Central and South America. There are many types of Caimans. Caimans are normally small and squat reptiles with an extremely toothy grin.

Crocodiles are characterized by a long and tapered snout. They tend to be a light tan to a brownish in colour. There are many species of crocodiles, which are found all over the world. Two species of crocodiles are considered man-eaters the – Saltwater Crocodile (Crocodylus porosus) and the Nile Crocodile (Crocodylus niloticus).

The Saltwater crocodile is the largest living reptile and its hide is the most sought after crocodile skin in the commercial world.

Sri Lanka has two species of crocodiles. One is the Mugger or Marsh crocodile known specifically as Crocodylus palustris. It is known as the Geta kimbula in Sinhala and Chaanakan in Tamil.The Gharial (Gavialis gangeticus) is a large crocodilian which inhabits India, Burma and Pakistan. It is also a rare animal found mainly in the Ganges River. The Gharial has an extremely long and slender snout with a ball like protrusion at the end of it.

The other is the Saltwater or Estuarine crocodile with the specific name Crocodylus porosus. In Sinhala it is known as the Hela kimbula and Semmookan in Tamil.

Though the status of the marsh crocodile in Sri Lanka seems to be secure in the sense that there probably are a few thousand spread throughout various water bodies in the island, the status of the saltwater crocodile is doubtful. This may be for a number of reasons, not the least being that no formal long-term study has been made on either species in Sri Lanka. It is known however that crocodiles have been extirpated from a number of their habitats in the island.

A paradoxical situation exists in respect of these two species of crocodiles in Sri Lanka. There are large numbers of the marsh crocodile spread all over the lowlands of the country whereas the numbers of the marsh crocodile in other countries has decreased greatly and it is considered a threatened species. On the other hand the number of saltwater crocodiles in Sri Lanka is small whereas they abound in other Asian countries, Papua New Guinea and Australia.

Crocodiles are carnivorous reptiles and are generally at the top of the predators in their ecosystem. They feed on fish and keep all species under control not allowing the larger and invasive species to dominate the ecosystem. They also feed on the weak and sick fish and help to keep the fish populations and water clean and uncontaminated by their scavenging. The presence of crocodiles is an indication of a clean aquatic environment.

Sri Lanka posses three hectares of inland lentic waters for every square kilometer of land. Lentic waters have no movement (as in reservoirs, ponds etc.) whereas waters that flow (like streams, rivers etc.) are called lotic waters. There are about 12,000 of these man made lakes, known as tanks, located mainly in the dry zone of this country. This is one of the highest densities of inland lakes, tanks, ponds, and other still waters in the world.

The habitats of the Saltwater crocodile are generally confined to the coastal region but sometimes they travel far up rivers having ascended the Kaluganga up to Ratnapura. It occurs in the estuaries of the larger rivers, appearing to prefer water that is only faintly brackish to that which is more saline.Research and surveys carried out earlier show that, both species of crocodiles were widely distributed in suitable habitats throughout much of the country.

The Saltwater crocodile had a wider distribution in Sri Lanka than the Marsh species. The Marsh species is mainly restricted to the lowland dry zone of the island. Neither of these two species has been found higher than 150 meters above sea level.

Though there is mention of saltwater crocodiles occurring in the Yala National Park, these are confined to the mangrove marshland area in Kumana.

Recently the Department of Wildlife Conservation (DWLC) has released one large man-eating saltwater crocodile, from the Nilwala Ganga in Matara, into the Bundala National Park. They have also released another a man-eater that was brought to the Dehiwela Zoo, in the Yala NP. Recently a crocodile took the driver of a group of visitors camping at Bundala.

The body covering that vertebrate animals have is called a skin, which is made of two layers; the outer epidermis and the inner dermis. In a reptile the outer layer is hardened, dry and tough. The skin of a crocodile consists of epidermal scales modified into plate-like structures called scutes. On the dorsal (top) side of the body bony plates lie beneath the epidermal scutes. These are called osteoderms (bone and skin).

The two species are easily distinguished by their pattern of dorsal osteoderms. The osteoderms of the marsh crocodile are rectangular and aligned to form transverse rows. Its snout is relatively short, wide and has four post occipital scutes where the cranium joins the spine.

The saltwater crocodile has ellipsoid osteoderms, which are separated from one another by epidermis. It has an elongate snout. The place where the head joins the body is covered with small, granular scales. It has no big scutes.

The adult marsh crocodile is dorsally a dark olive green in colour shading into brown, with black or dark brown bars and spots.

Ventrally it is white with faint traces of dark gray transverse bands interrupted mesially. None of the black markings extend beyond two rows of scales and are relatively constant in size. 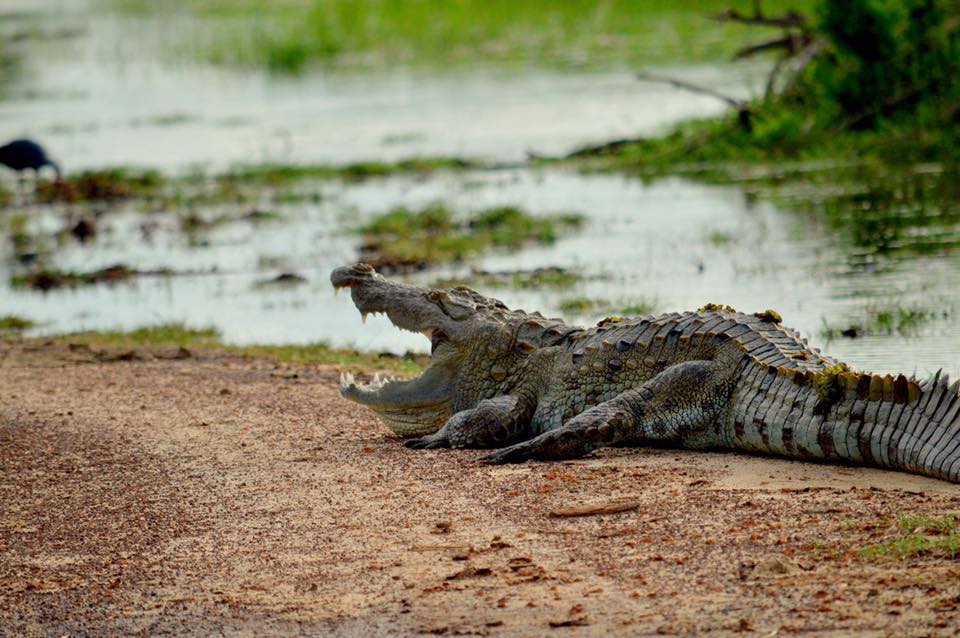 The saltwater crocodile is dorsally a brassy yellow colour spotted and blotched with black in four or five irregular transverse rows, ventrally it is pale yellow with dark spots under the hind limbs and subcaudals. Once the animal grows to about three meters long, the dorsal colour is almost a uniform black, the head and jaws yellow, and densely speckled with black.

Different individuals of the marsh crocodile have been known to vary in their temperament. Animals from one locality might be ferocious, while others from the neighbouring swamps or reservoirs will permit people to bathe or fish in their abodes with impunity. On the other hand the Saltwater crocodile is usually a man-eater and even today claims many human victims.

Crocodiles spend most of the time in the water but are not comfortable in waters that are deeper than about 10 meters. During times of drought crocodiles which have been harassed by man leave the water when it reaches a certain level but which is seemingly still ample for their safety.

Other individuals in jungle swamps remote from villages continue in them so long as any moisture remains. Young crocodiles emit croaks whilst adults croak and also emit a bellowing grunt, which can be heard for a great distance. Crocodiles are seen regularly on the banks of rivers, tanks etc., sometimes with their mouths open. This basking is to regulate the temperature of their bodies through heat dispersal.

In the 1970s fishermen netted many crocodiles to make ‘jerky’ (dried meat) or to get rid of them because they were considered a nuisance to their bathing, fishing etc. The destruction of the mangrove and marsh habitats of the saltwater crocodile has resulted in the depletion of its numbers. This destruction is due mainly to increasing urbanization and wanton destruction.

Some of the breeding habits of the two species differ. The marsh crocodile buries its eggs in soft sandy soil and decaying leaf matter mainly on riverbanks and tanks whilst the saltwater crocodile builds a mound-like nest often using the flag plant (Lagenthera toxicaria), but any reeds, pandanus, palms, thick grass etc will also do. The vegetation with which the nest is built decomposes as time goes on and generates heat necessary for incubation.

Romulus Whittaker tells me that the females start to breed from about 6 to 8 years of age in the marsh crocodile and 10 to 12 years in the saltwater crocodile. The males mature when they are older. The marsh species usually breeds once a year but at his Madras Crocodile Bank, they have bred twice a year. The saltwater crocodile breeds only once a year. It is likely that the two monsoons that occur annually in the island have a bearing on the breeding regimes of the two species.

Most females remain near their nest during incubation and protect it from predators. On hatching, vocalizations made by the hatchlings induce the female to assist the hatchlings to emerge from the egg. In some cases the mother carries the tiny babies to the water in her mouth. The sex of the hatchlings is determined by temperature. More males are born during periods of high temperatures. The hatchlings remain together near the mother for several months, deriving a certain amount of protection from her. As they grow and become more widely dispersed and independent, the majority of the offspring perish due to predation by monitor lizards, wild pigs, feral dogs etc. – some are even eaten by other larger crocodiles.