ABOUT THE SLOTH BEAR

The sloth bear (Melursus ursinus) is an insectivorous bear species native to the Indian subcontinent. It is listed as Vulnerable on the IUCN Red List, mainly because of habitat loss and degradation. It has also been called labiated bear because of its long lower lip and palate used for sucking insects. Compared to brown and black bears, the sloth bear is lankier, has a long, shaggy fur and a mane around the face, and long, sickle-shaped claws. It evolved from the ancestral brown bear during the Pleistocene and through convergent evolution shares features found in insect-eating mammals.

Sloth bears breed during spring and early summer and give birth near the beginning of winter. They feed on termites, honeybee colonies, and fruits. Sloth bears sometimes attack humans who encroach on their territories. Historically, humans have drastically reduced their habitat and diminished their population by hunting them for food and products such as their bacula and claws. Sloth bears have been tamed and used as performing pets.

This is the nominate subspecies and has a large skull with a condylobasal length of about 290 mm (11 in) in females and about 310 mm (12 in) in males.The sloth bear is the most widespread bear species in India, where it mostly occurs in areas with forest cover, low hills bordering the outer range of the Himalayas from Punjab to Arunachal Pradesh. It is absent in the high mountains of Himachal Pradesh and Jammu and Kashmir, the northwestern deserts of Rajasthan, and a broad unforested swath in the south, where Mount Abu Wildlife Sanctuary is located. Sloth bear occurs in protected areas such as Shoolpaneshwar, Ratanmahal, Jessore, and Balaram Ambaji Sanctuaries.
In Nepal, it is restricted to the Terai.

The Sri Lankan sloth bear is smaller than the nominate subspecies, has a smaller skull with a condylobasal length of about 250 mm (9.8 in) in females and about 264 mm (10.4 in) in males. It has much shorter body hair, and sometimes lacks the characteristic white chest mark. At the turn of the century, the Sri Lankan sloth bear occurred throughout Sri Lanka. But due to wide-scale conversion of upland forests into tea and coffee plantations, it is now restricted to the northern and eastern lowlands.

Sloth bears feed predominantly on termites and ants and employ a well-evolved method to dig them out. Their long, curved claws are used for penetrating nest mounds, which can be rock-hard. Once they’ve opened a hole, they blow away excess dirt then noisily suck out the insects through a gap in their front teeth. To do so, they close their nostrils and use their lips like a vacuum nozzle.

Beyond insects, sloth bears feast on a variety of fruit and flowers, including mango, fig, and ebony. They are also known to scale the occasional tree to knock down a bee honeycomb, which they will then enjoy on the ground below. It is this habit that’s given rise to their nickname, honey bears. 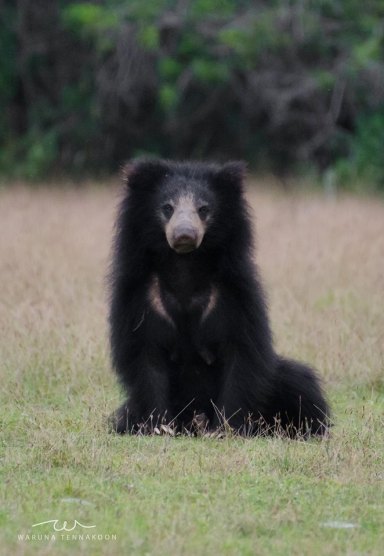 Sloth bears are solitary creatures and generally nocturnal. They grow up to 6 feet in length, and males can weigh up to 310 pounds, while females weigh up to 210 pounds. When threatened they respond by standing on their hind legs and displaying their formidable foreclaws.

They wear an extremely shaggy black coat and a cream-colored snout, and their chest is usually marked with a whitish “V” or “Y” design.

In India, sloth bears breed in late spring to early summer. In Sri Lanka, however, there is no seasonality to sloth bear breeding. Mating occurs over several days to weeks and is very noisy.

While embryonic development takes approximately two months, gestation lasts four to seven months due to delayed implantation. In the weeks to months before a birth, the female may exhibit “denning” behavior. She digs a den or prepares space in a cave. She may become less interactive, or easily agitated, disinterested in food, defend the cubbing area and sleep more. These behaviors, correlated with hormonal changes, may occur even if the bear is experiencing a pseudopregnancy.

In the North American zoo population, births generally occur in late December to early January. One or two cubs (rarely three) are born in each litter in an underground den. They are born weighing about 1 pound (2 kilograms), open their eyes at about 2 to 3 weeks old and start to “walk” around 4 weeks. Cubs will nurse for about a year. After emerging from the den at around 9 to 12 weeks, cubs stay with their mother for approximately two to three years before heading off on their own –a long time in comparison to other bears. Sloth bears are the only bears to routinely carry their young on their backs as a primary mode of transportation; the cub clings to the extra shag of fur (“saddle”) on the mother’s back until it is 6 to 9 months old. Many other animals that primarily consume ants also carry their young on their backs.

Sloth bears are sexually mature at age 3, but are rarely mothers until later in life. They breed once every three years, more often if they have not given birth or have lost their cubs. Sloth bears exhibit low fecundity and high infant mortality. Fifty-three percent of males and 38 percent of females die as cubs.

Sloth bears are noisy, busy animals. They grunt and snort as they pull down branches to get fruit, dig for termites and ants, or snuffle under debris for grubs and beetles.

If threatened, they will stand on two legs, brandishing their clawed forepaws as weapons. Their large canines are used for defense against tigers. Other potential predators include jackals, wild dogs, wolves, leopards and other Asian bear species.

These bears adapt their sleep-wake cycle to their environment and may be on a nocturnal, diurnal or crepuscular schedule depending on how many other bears, people or predators share their habitat. In protected areas, for example, sloth bears may be more active during the day. Sloth bears are typically active for about eight to 14 hours each day, and they do not hibernate. At the Zoo, they tend to keep a crepuscular schedule, meaning they are active in both the morning and evening but sleep midday and overnight.

Sloth bears are considered vulnerable animals. They are threatened by habitat loss and are sometimes captured for use in performances or hunted because of their aggressive behavior and destruction of crops.

Sloth bears likely view humans as potential predators, as their reactions to them (roaring, followed by retreat or charging) are similar to those evoked in the presence of tigers and leopards. Their long claws, ideally adapted for digging at termite mounds, make adults less capable of climbing trees to escape danger, as are other bears such as Asian black bears. Therefore, sloth bears have seemingly evolved to deal with threats by behaving aggressively. For the same reason, brown bears can be similarly inclined, accounting for the relatively high incidence of seemingly nonpredatory aggression towards humans in these two bear species.

Officers in British India often kept sloth bears as pets. The wife of Kenneth Anderson kept an orphaned sloth bear cub from Mysore, which she named “Bruno”. The bear could be fed on almost anything (including motor oil) and was very affectionate toward people. It was even taught numerous tricks, such as cradling a woodblock like a baby or pointing a bamboo stick like a gun.

Dancing bears were historically a popular entertainment in India, dating back to the 13th century and the pre-Mughal era. The Kalandars, who practised the tradition of capturing sloth bears for entertainment purposes, were often employed in the courts of Mughal emperors to stage spectacles involving trained bears. They were once common in the towns of Calcutta, where they often disturbed the horses of British officers.

Despite a ban on the practice that was enacted in 1972, as many as 800 dancing bears were in the streets of India during the latter part of the 20th century, particularly on the highway between Delhi, Agra, and Jaipur. Sloth bear cubs, which were usually purchased at the age of six months from traders and poachers, were trained to dance and follow commands through coercive stimuli and starvation. Males were castrated at an early age, and their teeth were knocked out at the age of one year to prevent them from seriously injuring their handlers. The bears were typically fitted with a nose ring attached to a four-foot leash. Some were found to be blind from malnutrition.

In 2009, following a seven-year campaign by a coalition of Indian and international animal welfare groups, the last Kalandar dancing bear was set free. The effort to end the practice involved helping the bear handlers find jobs and education, which enabled them to reduce their reliance on dancing-bear income.