The 10th of November 2018 was a notable day for all Rotaractors especially for those who are burdened with managing finances manually. With the launch of the Rotaract Easy Finance System (REFS); joint initiation by Rotaract clubs of Colombo Central and SLIIT, we were all able to witness how a treasurer’s role will be simplified in a matter of a few clicks.

The event started off with everyone gathered singing in harmony the national anthem, followed by the flag salutation, Rotaract invocation, four-way test and the Rotaract Song. Afterwards we were introduced to the system, where we were able to obtain a comprehensive insight as to how the system works. During the trial run, we realized how easy and completely hassle free it would be for anyone at all who must spend days and weeks handling finances in a manual manner.

Thereafter the software and the hardware components used to make this system a reality were made known to us and then the ground was open for questions and answer session. As you would have already guessed, everyone was more than curious about the price of the system and we were all quite stunned when the speaker announced the price was Rs. 2400 only. In addition to this surprise, both Rotaract clubs took the opportunity to conduct a raffle draw, through this Rotaract club of Excellence was chosen as the winners to obtain the REFS free and the clubs present at the event were given the chance to obtain this system at a discounted value. This system can be further developed to cater to interact clubs, the Rotary and anyone at all who faces these issues on a daily-basis as per our Chief Guest Rtn. Dayan Samaraweera. 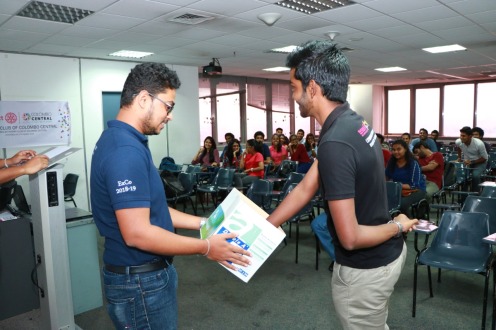 On behalf of RAC SLIIT and RAC CCC we would like to thank Rtn. Dayan Samaraweera; the Youth Services advisor of the Rotary Club of Colombo Central, District sergeant-at-arms Rtr.Hiraz Hyder, Immediate Past District Treasurer Rtr. pp Aaqeel Jiffrey and all the Rotaractors for joining with us to witness the launch of REFS.