Polar bears are one of the most iconic and well-loved species in the world. Despite this, these majestic and awe-inspiring bears are under serious threat from climate change, which has left their sea ice habitat dwindling. Here are some common facts about this majestic creature.

Polar bears are classified as marine mammals because they spend most of their lives on the sea ice of the Arctic Ocean. They have a thick layer of body fat and a water-repellant coat that insulates them from the cold air and water. Considered talented swimmers, they can sustain a pace of six miles per hour by paddling with their front paws and holding their hind legs flat like a rudder.

Polar bears spend over 50% of their time hunting for food. A polar bear might catch only one or two out of ten seals it hunts, depending on the time of year and other variables. Their diet mainly consists of ringed and bearded seals because they need large amounts of fat to survive.

Scientists have divided the total polar bear population into 19 units or subpopulations. Of those, the latest data from the IUCN Polar Bear Specialist Group show that one subpopulation is in decline (Southern Beaufort Sea) and that there is a high estimated risk of future decline due to climate change and data deficiency.

Because of ongoing and potential loss of their sea ice habitat resulting from climate change, polar bears were listed as a threatened species in the US under the Endangered Species Act in May 2008.

Because they spend most of their lives on the sea ice of the Arctic Ocean depending on the ocean for their food and habitat, polar bears are the only bear species to be considered marine mammals. Polar bear fur is translucent, and only appears white because it reflects visible light. Beneath all that thick fur, their skin is jet black. As well as reaching speeds of up to 6mph in the water, polar bears can swim for long distances and steadily for many hours to get from one piece of ice to another. Their large paws are specially adapted for swimming, which they’ll use to paddle through the water while holding their hind legs flat like a rudder.

Although about half of a polar bear’s life is spent hunting for food, their hunts are rarely successful. Polar bears main prey consists of ringed seals and bearded seals, though they will also scavenge carcasses or settle for small mammals, birds, eggs and vegetation.An innovative new technique developed by WWF and DNA specialist firm SPYGEN allows scientists to isolate DNA from a polar bear’s footprint in the snow. Two tiny scoops of snow from a polar bear track revealed not just the DNA of the polar bear that made it, but even from a seal it had recently eaten.

While climate change remains the greatest threat to the polar bear’s survival, that is not all that the predator is up against. The oil and gas industry is turning its eyes to the arctic, and with it comes the potential risks of habitat destruction from oil exploration work. Contact with oil spills can reduce the insulating effect of a bear’s fur requiring them to use more energy to get warm, and can poison them if ingested. Polar bears can also be exposed to toxic chemicals such as pesticides through their prey, which can affect a bear’s biological functioning and ability to reproduce. 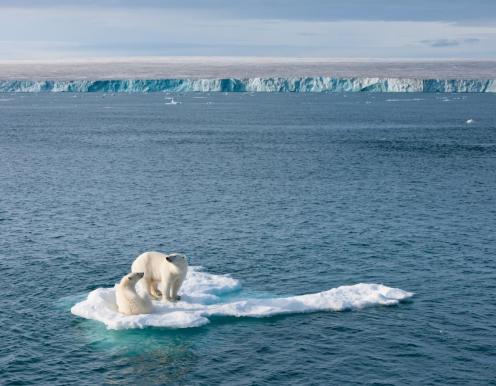 Melting sea ice from climate change has increased human-polar bear conflicts when hungry polar bears go searching for food in the summer. Fortunately, people are learning to adapt to the polar bear’s presence and take preventative measures to reduce the risk of conflict.

As recently as 2006 genetic testing confirmed the existence of polar bear-grizzly bear hybrids, also known as ‘grolar bears’ or ‘pizzly bears’. The hybrid physically resembles an intermediate between the two species, but as wild hybrids are usually birthed from polar bear mothers they are raised and behave like polar bears. The ability for polar bears and grizzly bears to interbreed is unsurprising when you consider that polar bears evolved from brown bears as recently as 150,000 years ago!

The total population of approximately 26,000 wild polar bears are divided into 19 units or subpopulations. Of these just 1 subpopulation is increasing, 5 are stable and 4 are in decline. The remaining 9 have not been assessed as they are data deficient – we simply don’t have enough information about them to know how they’re doing.

Polar bears were one of the first species to become threatened due to anthropogenic climate change. They rely on sea ice to cover large areas in search of food. A longer melting season due to climate change means that sea ice is forming later and breaking up earlier in the year, restricting the polar bears’ feeding range. This is particularly impactful on pregnant females, who need to build up fat stores to live off of when birthing and nursing cubs.

Organisations such as WWF are working hard to secure a future for polar bears.