The history of Rotaract District Sri Lanka and Maldives runs far back to 1969 with the constituting of the Rotaract club of Colombo and ever since the act has influenced and shaped the lives of youth.

At present, almost 50 years after its inauguration, the Rotaract District 3220 SriLanka and Maldives boasts of 4300 Rotaractors representing 65 clubs spread island wide. “Each Rotary District needs a way to prepare its leaders, and its clubs’ leaders, for their roles.” Says the LEAD YOUR DISTRICT, International ROTARY Training Manual 2016 edition.

In order to develop skills of leadership among the clubs and their members, Rotaract District Committee organizes several events annually. The President-Elect and Secretary-Elect Seminar know as PETS and SETS is one of the most important national level events being organized by Rotaract District Committee of Rotaract District 3220 SriLanka and Maldives. Event is basically for strengthening the Rotaract movement and leaders, reaching and spreading themselves into more friends and unleashing themselves into bigger network. Fun, entertainment and new learning opportunities are some essential includes of the event, while it mainly focuses on providing training sessions to the presidents, secretaries and other directors and members to succeed in their roles to be performed.

This year, PETS and SETS 2019 was held successfully on July 1st and 2nd in Tangerine Hotel, Kalutara with nearly 180 participants from all over the country. The event was hosted by collaboration of three Rotaract clubs from different directions of the island namely Rotaract Club of SLIIT, Rotaract Club of Katugastota Region together with Rotaract Club of Singer SriLanka.

Main aim of the event was to train participants and provide them a platform to get to know their upcoming Rotaract family. The program of PETS and SETS was scheduled for two consecutive days which had an attractive flow including both knowledge and entertainment. The upcoming leaders got the privilege of meeting and sharing experiences of seniors. The guidance given by the heads and former officials made the participation worthy and unforgettable, a statement from a Rotaractor said.

The event officially started at 9.30 a.m. after the arrival and registration of participants at the venue. 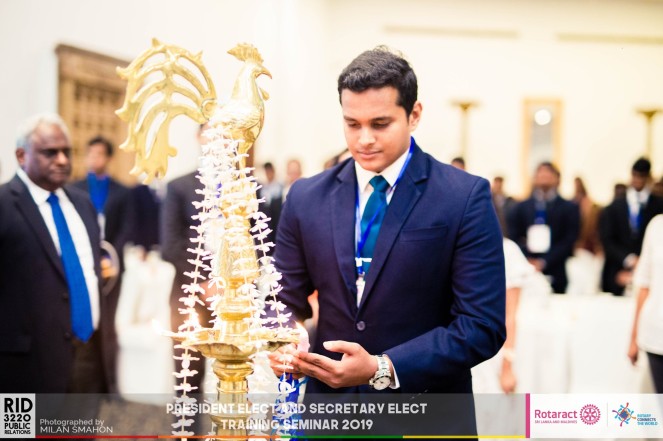 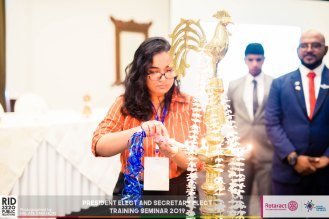 After the opening ceremony the official group photo was taken.

The first day of the program was divided into sessions which covered developing certain skills of participants along with fun and entertainment. First day ended up with a campfire and a celebration of talent which lighted up the memories of all Rotaractors. 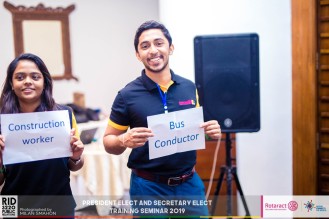 Second day of PETS and SETS 2019 started with a session to boost up physical fitness of participants through a series of exercises and activities. Unfortunately, the session was disturbed by rain destroying the enthusiasm of young Rotaractors. In contrast to day one, day two had seven sessions which resembled the participance and engagement on the event by DRR 2018-19 Rtr. PP. Amjath Yoosuf, District Rotaract Committee Chairperson 2019-20 Rtn. PP. Jegatheeshan Pirrashanth and Service Chairperson 2019-20 Rtn. PP. G.S. Sylvester. 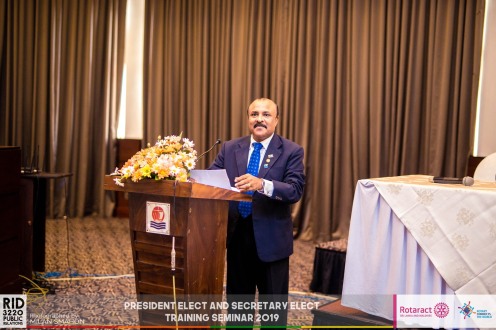 The practical guide for Rotaract Club Presidents was presented by District Rotaract representative 2019-20, Rtr. PP. Krishnan Balaji. While practical guide for Rotaract Club Secretaries was presented by District Rotaract Secretary 2019-20, Rtr. Harindee Fernando. The participants were given a vast idea and knowledge about local and global communities, policies, constitution and Bylaws related to Rotaract and an understanding on Rotaract framework plus Rotary international standards. “We had to do a presentation for a topic they gave. I think most of the teams didn’t just do a presentation… It was with a small drama and those were creative and nice. Finally, we couldn’t do the bidding sessions due to technical issues.” Said Tharoon Madusanka, the proxy from Rotaract Club of SLIIT. 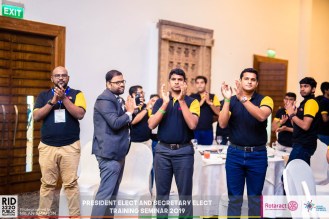 The PETS and SETS 2019 of Rotaract District 3220 SriLanka and Maldives marked its end with the departure of Rotaractors and officials from Tangerine hotel, Kaluthara in the evening of July 2nd.The participants didn’t return empty handed. Their minds were nourished with knowledge they expected, their hearts were filled with joy and memories full of excitement along with their lives colored and delighted with bunch of new friends and responsibilities. It’s no doubt at the end of the day all of them were determined and prepared for a long, successful journey to be completed with the Rotaract family. Like this, completing another few pages of the Rotaract diary, the annual PETS and SETS for year 2019 was achieved remarkably.