The Rotaract club of SLIIT together with AIESEC in SLIIT came up with the perfect remedy for our stay at home blues during the month of May. The two clubs got together to conduct a virtual concert to bring popular and upcoming talents right to our home.

The PR campaign started at the end of April to tingle the curiosity of everyone. Applications to select amateur performers were called, and the selection process started on 3rd of May. The judges for this event were Nifal Ibrahim and Helani Jayawardhane our very own talents of SLIIT. Auditions were held via Zoom and 10 out of 45+ applicants were chosen to perform on the big night.

These upcoming singers were given a thorough training to polish their skills and to help them give their 100% in showcasing their talents. Since this concert is virtual, we had to make sure minimum technical difficulty was faced by all the performers, therefore everyone rehearsed well before the show time. The concert was broadcasted live on Zoom and through the Rotaract – SLIIT and AIESEC Sri Lanka Facebook pages.

The most awaited night arrived and ESCAPE – a musical getaway dawned to our home on the 9th of May sharp at 8.00 pm.

The hosts for the night were Hesha Inali and Nipun Maduranga. The night was kick-started by a performance by Nifal Ibrahim. Nifal is a student at SLIIT and is a member and the guitarist of a well-known musical band Infinity. He performed an original song by his band titled “Heethala Wassa” and a song by Bathiya and Santhush.

Next the platform was given to our upcoming talents. Minuli Lokuliyanage an undergraduate studying in her 2nd year at SLIIT sang one of Dua Lipa’s hits “Scared to be lonely”. Her performance was followed by Pavani Arandra who was celebrating her birthday that day did not fail to entertain us by the song “Marambari” by our very own senior artist Edward Jayakody. Next up was Shakisna Ravichandran who is a Carnatic vocalist and a Bharathanatyam dancer studying architecture at SLIIT. She sang a tamil song by Hariharan and Srinivas, “Uyire uyire”.

Reeni de Silva was next to step on the stage. Reeni is a popular cover artist on YouTube, she also has performed live at events like Sumathi Awards and has voiced the theme song of couple of teledramas. She gave an amazing rendition to the songs “Maa eda” by Anjalin Gunathilaka and “Sanasennam maa” by Senaka Batagoda which are timeless favourites of every generation.

The musical prodigy Stevie Wonder’s classic “Isn’t she lovely” was performed next by Anjana Liyanagamage who happened to be a good beatboxer too. He did not fail to showcase his beat boxing skills as well. Sankhaja Hapukotuwa took on the stage with the sinhala song “Duwillen wasthsunu thawara” from the movie Sapthya Kanya.

The art of mimicking musical instruments by using one’s mouth, lips, tongue and voice is the basic idea of what beat boxing is, it may seem easy but it takes a certain skill to master that talent and Saranga Karunarathne is no stranger when it comes to this. It was a great pleasure to witness his amazing talents at ESCAPE as it is something we rarely get to see. Saranga’s ability to make a great work of art by using just the sounds of his mouth and a musical instrument such as a flute was something extra ordinary. He did not fail to mention how he started his passion and from where he was inspired to try on these tricks.

Another upcoming talent, Jeramine Alexander stepped onto the platform with a mashup of “Unfaithful” by Rihanna and “Unekena nan” by Divya Spandana and Vijay Antony.

Then it was time for one of the most awaited moments. The current faves of our generation Ridma Weerawardhane, Dhanith Sri and Supun Perera joined us on the platform. This trio was humble and engaged in a hearty conversation with the hosts. The three took turns to perform each other’s popular songs. Supun started off with “Prathihari” followed by a song by Danith, “Sandaganawa”. Then Ridma performed one of his popular songs “Sandawathiye”. All three of these personalities shared with us old memories of them and how they started singing and how they built a platform which brought them fame. Next Supun Perera concluded his performance with the song “Radhawani”. Ridma did not fail to amaze us with his voice by performing “Kuweni” the song which he was mostly known for. Finally, Danith Sri ended the performance with his hit “Pandama”.

The next amateur talents to perform were Viduni and Rodney. Viduni Dedduwa Pathirana is a first-year undergraduate at SLIIT and loves ballet and art other than singing. She gave a marvelous rendition to Kushani Sandareka’s song “Matama Mama Avanatha Novee”. Followed by that was Rodney who is in his 3rd year at SLIIT performed a song from the movie KK, “Tharame Tharame”. 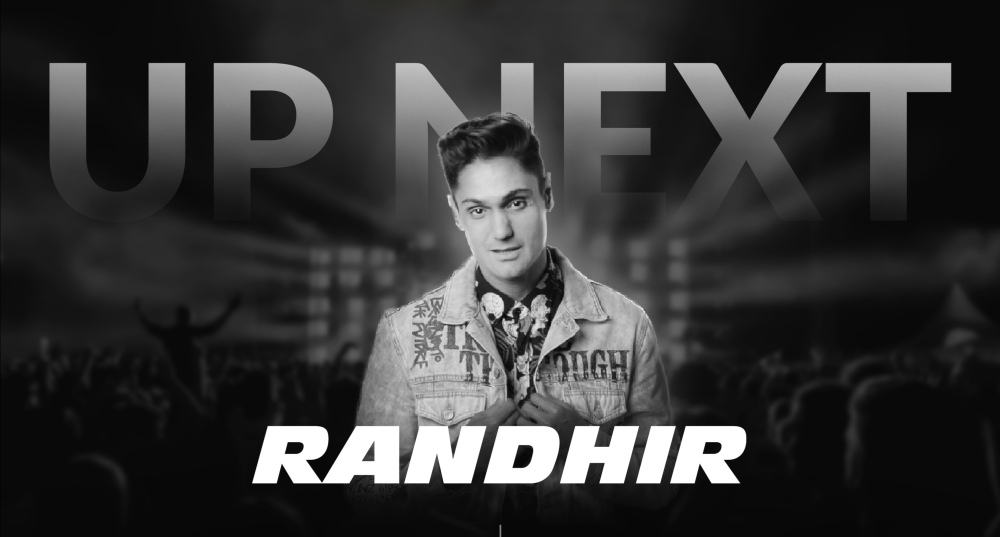 Most of our childhood was spent in the 2000s and our memories are bound with songs we heard on the radio and music videos we watched on TV. “Namal Mitak” and “Oye ojaye” were couple of songs that we never forget since we grew up with them. It was indeed an honor when Randir Withana accepted our invitation to perform at ESCAPE. He performed our favorite songs including “Mal madahasa”. Randir never fails to share a word of wisdom, he advised us to keep moving on amidst the obstacles thrown at us. Also, he thanked the two clubs for organizing such an event with the prevailing situation in the country and he kindly requested not to forget to invite him when other such events are organized by our Institution.

Up next was Keleigh Berenger who is an undergraduate at NSBM. Andra Day’s popular song “Rise Up” was the song performed by Keleigh. It was nice to see a talent outside of SLIIT and we can all agree that every upcoming artist has the potential for a successful career in music. Last but not the least, it was the performance by our upcoming celebrity Rashmitha Wijerathne. His take on “Teri Deewani” by Kailash Kher was a highlight of the night which gave goosebumps to all the listeners seeing his amazing performance.

With over 6.2k views on Facebook and 450+ participants on Zoom, ESCAPE – a musical getaway concluded on a high note. I take this opportunity to thank everyone who joined to share this experience with us and to all the performers who took their time to add colour to this evening. 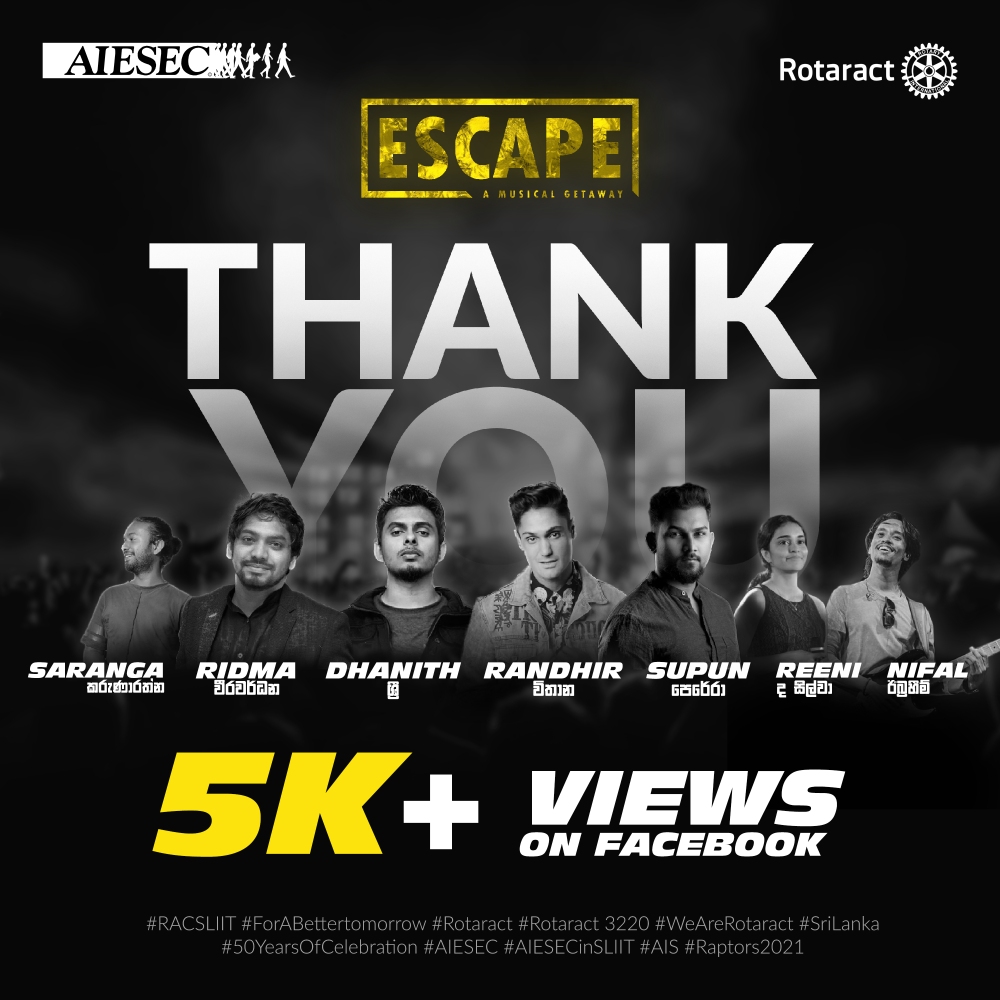 A huge appreciation goes out to the organizing committee. This was a vision turned into reality within a short period of time. Thank you Rotaract Club of SLIIT and AIESEC in SLIIT for letting us be a part of the biggest virtual concert held in Sri Lanka.