“26th of December…” It is actually the Christmas Season and more specifically the date after the birth of the Jesus Christ, which is one of the happiest seasons of the year. But what would it mean to emphasize on a project called “Before I die”?

The Tsunami struck on 26th of December 2004 as a result of a severe earthquake is declared as the region’s most powerful tidal disaster. Though it has been fifteen years now, the underlying sorrow has never faded away. Ever since, a numerous remembrance ceremonies had been taken place across the region in the aim of extending condolences and praying for peace to the lost souls. 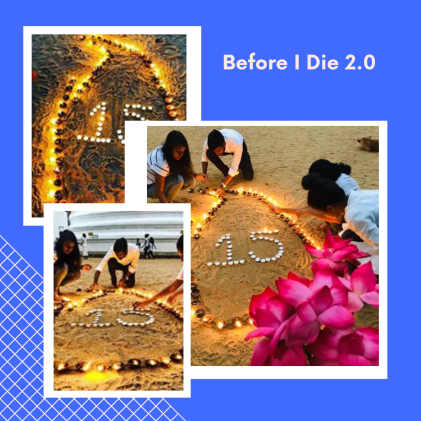 The Rotaract Club of SLIIT too stepped up to conduct a “Tsunami Remembrance Program” in the year 2018. This year, we organized a  “Pahan Pooja” at Kelaniya Rajamaha Vihraya” among the number of memorial services held across Asia to mark the fifteenth remembrance year of devastating Indian Ocean Tsunami.

The project was held on 26th of December 2019 at 6.00 pm with the participation of Rtr. Oshadie, Rtr. Nishali, Rtr. Praveena, Rtr. Nipun and myself. We all gathered to the Temple premises at around 4.00pm. Then we strolled over to buy some necessary items for the project. After buying some oil lamps, match boxes, candle lamps and oil, we went into the Kelani Rajamaha Viharaya.

Before starting the project, we offered flowers and incense sticks to the Lord Buddha and worshiped. Next we found a better place to organize the oil lamps. We used more than hundred oil lamps and fifty amount of candles to light up the area. Rtr. Nishali sketched the map of Sri Lanka on courtyard and number ‘15’ as well to indicate the 15th year. Then we all placed oil lamps along the sketch. Not only our members but also some devotees gave their contribution to this course.

We made a great effort to spread the illumination around the area in the name of all the souls lost in the tsunami devastation fifteen years ago.  The project was a massive success which was beyond the expectation!