What is it that pops into your head when someone says its December? Obviously its Christmas right?! Well the Rotaract Club of SLIIT, as always stepped up to carry out something extraordinary and this time it was a colorful surprise – a joyful evening at the Stanley Jansz Grounds, filled with love and colors and some good music buzzing through the air, termed HOLI FEST ’19
Initially speaking about how the event turned out to be a huge success, from its formation until the conclusion of the project, the organizing committee worked tirelessly for a period of almost 2 months just to present to you an evening that rocked your souls! Hats off to everyone who set aside their personal endeavors and interests and joined us in this tough but amazing run! Starting off with the lookout for a venue for the event, the organizing committee set out to successfully complete all the tasks for which they held responsibility. Once the date, time and venue i.e. the event was confirmed, next came the biggest and toughest of all tasks – the lookout for sponsors and partners, printing and designing the tickets and t-shirts, obtaining government permission to host the event, preparation of the decorations and items for the event, execution of the PR plan, sale of tickets and t-shirts. Last but not least even the simplest of tasks had to be completed successfully and in a timely fashion. Time management, handling people, communication and teamwork were some of the greatest lessons learnt for everyone in the committee. No matter how tough it was and how difficult it seemed to organize such an event, the commitment of the organizing committee and the team spirit that held us together resulted in the successful completion of all tasks.
As part of the organizing committee, the experience we had was one of a kind! In order to complete the tasks allocated to us we had to roam around the city of Colombo, visit several offices, be educated on the latest rules and regulations and event organizing procedures. We simply wouldn’t have been able to experience these if not for being a part of this event organizing process and moreover the knowledge gathered and the contacts formed would definitely be worthy and fruitful in future.

Out of all the visits we paid to places around Colombo, the most fun was the shopping trips made to Pettah! As part of the plan we had already decided that pettah was the ideal place for us to purchase all required supplies for the event. It being the month of December and Christmas was less than a week away the streets were filled with massive crowd storming in to buy decorations and other supplies. initially it felt like we simply shouldn’t have turned up, but then the best part was yet to come! The streets were filled with stalls selling Christmas decorations, and it seemed as if the streets had been decorated as they looked unusually beautiful with all the decorations glittering when they were exposed to the mighty rays of the sun and yes it was a hot and humid day, but the surrounding was so distractive that we never felt it. There was such a huge variety of decorations and we had a really hard time choosing as every time we chose one, one of us comes up with another type of decoration looking better than what we already chose. The girls had a good time wrapping decorations around themselves and posing as if they were performing in a fashion show!
Having conversations on various topics, laughing around while we walked from shop to shop and street to street, missing our destinations and getting lost just added up to the fun we were already having and even made us forget the hunger and exhaustion we had in ourselves.
The next most memorable and fun filled day was when we were packing the colored Holi powder as preparations for the event. Not a single soul present there hesitated to splash or rub some colored powder on the face of the person next to them (Holi came early!) . At the end of the day all of us had our faces covered in differently colored powder and it seemed as if there had been a mini Holi Festival! It was such a happy and memorable day and all we could feel was that the friendships and bonds were simply getting stronger.
Well of course the event day as agreed by any member of the organizing committee was the most hectic for us! Having arrived at the Stanley Jansz premises early morning for event preparations, the most notable scenes were of the committee members and other volunteers running back and forth restlessly just to get things done. It was the primary objective of presenting the participants something beyond their regular expectations that was stuck in our heads that provided us with the motivation and strength to keep grinding even though we had to face certain unexpectable circumstances at first!

Nearing the commencement of the event crowd started rushing in from the entrance to grab their tickets and t-shirts before it was too late to witness the beauty of Holi Fest’19. Special thanks should be conveyed to the committee members and volunteers who were in charge of the ticket and t-shirt counters and of course the ones who handled the crowds along with the bouncers who were of great service!
While the entire crew for the event was busy fulfilling their responsibilities, Holi Fest’19, the wonderful experience everyone was looking forward to had begun! This part of the article was actually written based on live experiences of ours and complements given by the participants at the end of the event. Even though we, the members of the committee were unable to experience the fun at Holi Fest’19 at the beginning, we never hesitated to carry out routine checks on how the event was, and it was evident that everyone was having the best time of their lives. Individuals splashing colored powder onto their friends and loved ones, beautiful dance moves that rhymed with the music, all smiles and happiness in everyone’s faces made it feel like there was so much love and happiness in the air, and most of all the satisfaction and pride we held in ourselves as the organizers of this event was immeasurable.
One of the most iconic parts of the event was when the games and activities planned for the event were held as it drew the interest of almost everyone present! It was such a beautiful scene when the already colorful and happy faces rounded up to pledge support to their friends. There was simply so much energy, life and unity involved! At the end of the day it was not the winners or losers that mattered the most, but the good times and joyful memories that everyone would hold onto for a lifetime.
One by one as our responsibilities were being completely fulfilled, members of the organizing committee who were eagerly waiting for an opportunity to join the already rocking event and started having fun too! After a day of so much hard work and stressfulness, I think it was them who were the most excited and had the most amount of fun, and fair enough they deserved all of it after all they’d done to come up with this exceptional event!
As time passed by, and dusk approached, just as everything has an ending, Holi Fest’ 19 was beginning to conclude as well. As darkness approached, the once loud music and the happy voices of participants slowly started to fade away! Even though it was a bit of a sad moment for all of us, having good complements and appreciations thrown at us was something to cherish. 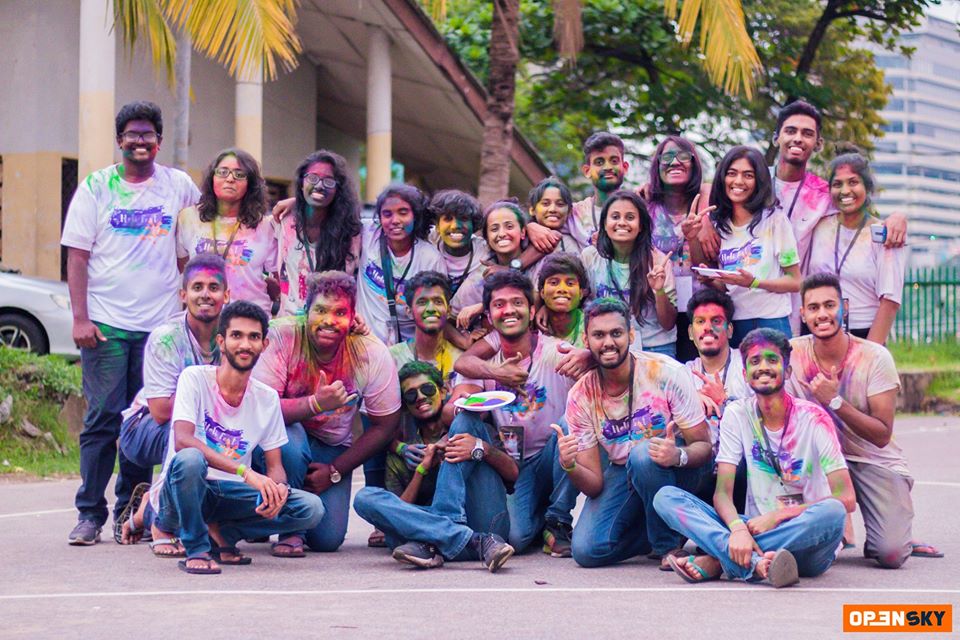 last but not least, follow the link below to catch a glimpse of the blissful evening that rocked your soul!